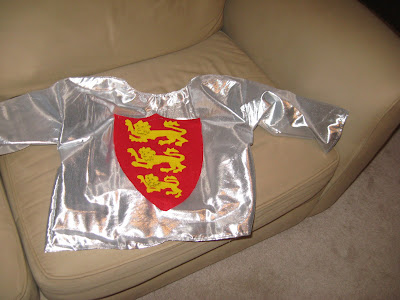 He had to pick someone from the Middle Ages for school.
We picked Richard the Lionheart.
at 8:09 PM No comments: Links to this post Again, the colors are more subtle than this, but you kind of need to see it in daylight and that's getting hard to come by after dinner these days...

It actually has the feel of walking in a beech stand in October in New England - and it's nice and warm. Just the thing to have in your lap as you knit after getting your flu shot today . . . .
at 8:23 PM No comments: Links to this post

Gryffindor Sweater is done, NEXT! 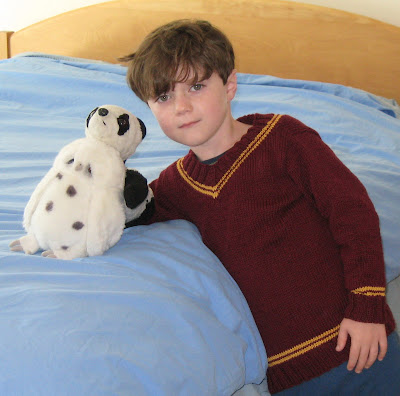 Well, here it is. Fits beautifully. Which means that I'll be coming up with larger sizes quite soon, no doubt. Pattern is in the 9/26/07 post - please use it if you want! Valley Yarns washes and dries like a dream.
(On a side note, I haven't blogged much lately because things have been busy - like snaking out the dryer vent on our house which had 14 years of fossilized lint and crap in it. It took over 4 hours and involved filling a 10 quart bucket with unspeakable muck, but it was really fun in a way. I think being a plumber would be much more fulfilling than what I really do for money ...)

In case you don't recognize her, that's Hedwig on the bed . . . She'll being going trick-or-treating with us this year.
For my next trick, I'm doing the Green Mountain Spinnery Norwegian Roses pattern for my mom. Here's the start. Mom 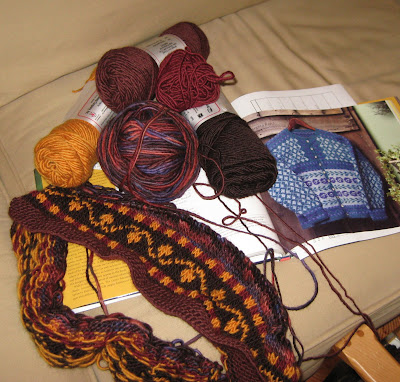 picked out the colors, and you might have heard about as people age the balance of their color receptors in their eyes changes and some people begin to really gravitate towards orange and yellow as those (cones? rods? I used to know) receptors burn out. I've insisted this is what's up with my mom for a while now. And I have to admit when I started to knit this I thought "oh golly, mom, this looks like Burger King" - but it doesn't. It's quite nice and understated. The colors in this picture are far brighter than real life.
at 8:39 PM 1 comment: Links to this post

We have a neck and sleeves (again) 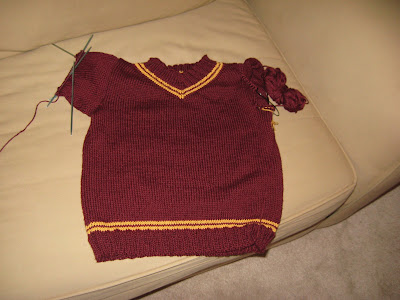 I had gotten the entire neck finished, ends sewn in and everything, when I started on the sleeves and realized I'd messed up on the left side.
Yup. Had to cut off the neck, rip out the left shoulder sleeve, pull down the front left side, reknit it, resew, repick up, reknit and refinish the neck.
And you know what? It looks SO MUCH BETTER. Can't thank my husband enough -- after a 5 second look as I expressed my worry he said: "Yeah, they aren't the same, it's always going to be a little shorter on that side and pull - he'll notice."
It was a two stitch mistake, but he was right. So, here it is. Having to do the sleeves on 4 needles, as I don't have a small circular 4 (how did that happen, but I have a zillion size 3's of every length imaginable?).
at 8:26 PM No comments: Links to this post

Everything's coming up scarlett and gold

I have apparently surrendered to my fate of moving into Gryffindor house myself. Here's the sweater and the quilt, which are coming together in tandem. The flora on top of the shield on the quilt is kind of hard to make out in this picture, but it looks pretty good in real life. 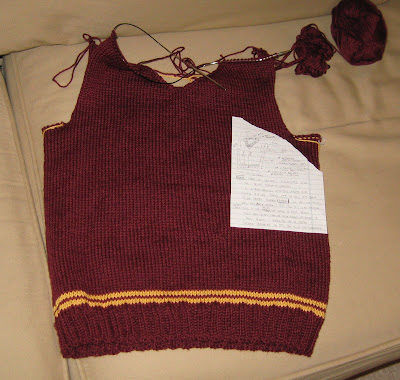 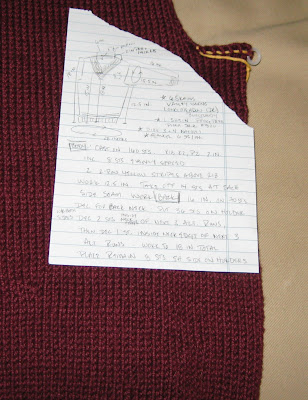 I think the sweater looks good so far (I'm adding to the pattern as I go in a previous post) but it's hard to tell if you're designing something for the first time. My stuff tends to have fat bodies and skinny sleeves with droopy shoulders, I'm trying to get away from that here with the set in sleeves.
I must confess, though, I'm kind of excited to move on to a broader color palette ... 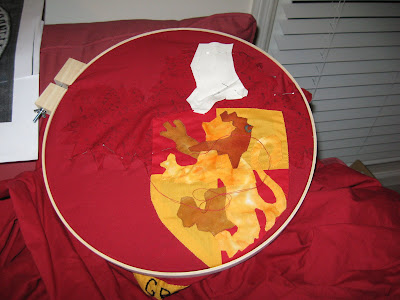