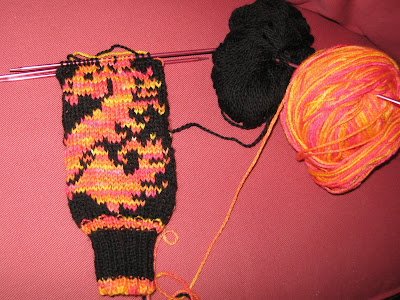 So, the small one wanted some mittens - he liked the flower mittens, but of course they were too big. So he helped design these. It's a dragon, based on an early 20th century fillet crochet pattern. It kind of looks like a knight in chess, too. Anyway, I'll chart these up and this time I'll chart them for multiple sizes. Hopefully in the next week or so.
I've also finished the first entrelac sock and the back of the white sweater. I have this bad picture of the purple Gloss with some lovely purple beads, but I still have to chart that and the pumpkin. 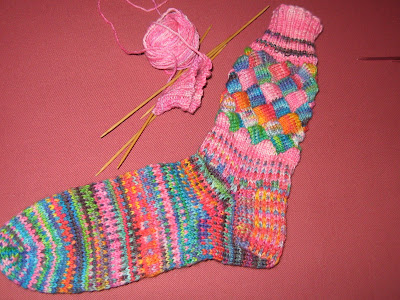 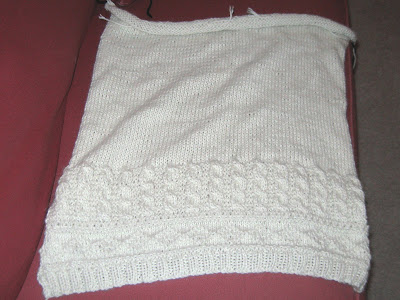 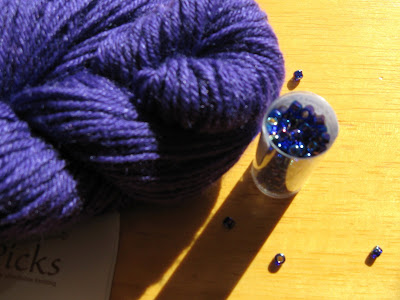 So, my husband reminded me of this story of a bunch of record executives were doing some user testing. They invited in a bunch of teenagers and after all the testing was done they thanked the kids for their time and help and told them that there was a table full of CD's and they were free to take any, as many, as they wished. None of the teenagers took anything and that told the executives just how much trouble their industry was in.
One thing about the age of Ipods and MP3 players that makes me a little sad is that often, back in the dark ages, when you bought an album, you buy it for one or two songs and then grow to love the others. Sometimes even discover something you really loved that never got airplay. Today's digital music consumers are no longer forced to also pick up all of what the artist, or more likely the record company, had put on the album. While my husband has a point when he says that think of all the dreck and filler you don't have to buy, I think of what you'd miss out on if you only bought, say, "Run like hell" off The Wall.
So what does this have to do with knitting?
What's your work worth? How is it consumed?
I've started posting my patterns on Ravelry for free. People have been downloading them, which is a great source of happiness for me. I'm so pleased people like my stuff. I hope they enjoy these patterns and make some of them. (I have no idea what the rate of download to knit is when it comes to free patterns on Ravelry, I'd be willing to bet it's pretty low. After all, the thrill of potential is so much cooler than any single thing, frozen into reality once you commit to the yarn and color. . . ) But at some point I'm going to start charging for at least some of my work. Will people want it, how much are my original ideas worth? How original are they? I've read so many books, magazines, websites by now that I don't think I can claim any of my ideas are totally my own - so how much borrowing is okay if I want to charge for my idea? And finally, would I be better off if my work was in a book, either with many other people's ideas or just all my own? Do I need an editor? Probably. Would people have a better chance of coming to love my patterns years after purchase (like I do with so many of my books) and so preserve my ideas longer if they were in this more durable form, instead of easily downloaded and easily lost?
at 8:34 PM