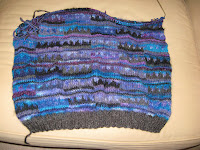 So at first, I thought I wanted to rip out this 2/3 of a back I'd started. Bear in mind, this was started nearly 6 years ago after our son was born, and I was still going through new mom denial that I could still do everything I had before he was born (and that nothing would take much longer than it ever had, ha!)
Now, of course, that would be dumb (it's been knit for 6 years, it ain't comin' apart) and now I realize, I don't really want to. Oh, and it's 50 percent mohair, and that stuff doesn't rip out at all.

I've had this sack of assorted blues, grays, purples, and blacks for years, and have already made 2 sweaters out of it (all of these are from Fassett's Glorious Knits) the first was the outlined stars pattern 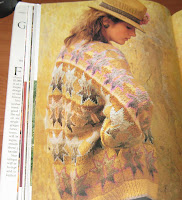 (here's the picture from the book - I made this for my 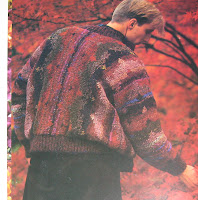 mom who gave it my cousin [it took me 2 years to do because I was working and going to school at the time] - in fairness, it was way too big)
... and the second one was jack's back pattern - again from the book because I don't have the sweater anymore, I gave that one to my other mom (she's not related at all, I just like her so I adopted her - she taught me to spin) and as far as I know, she still has hers.
So, what I had thought I wanted to do was this: 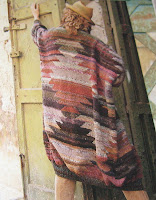 and I still want to try it, in a normal size sweater, rather than a coat, but maybe in earth tones, rather than as blues and grays.
So I think my new project is to finish that 6 year old pillowcase full of loveliness.
at 8:21 PM